“Around The Horn” is news feature resurrection from the early days of RamNation.com. We take readers around the college athletics world, as it relates to Colorado State and the Mountain West Conference. This edition of ATH is brought to you by Rams Book Store, a RamNation.com sponsor since we launched in 2000. They’re an annual sponsor/prize provider for our football pick’em contest and basketball pool, and have been a fantastic partner for almost 20 years. If you’re in the market for CSU attire, give Rams Book Store first shot at your business! 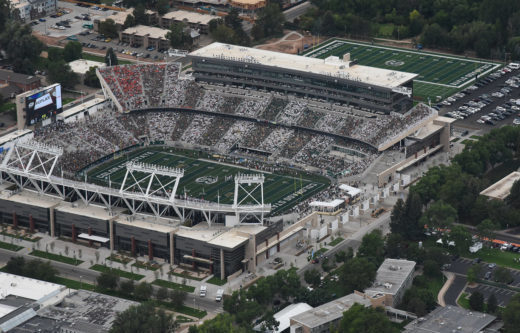 Canvas Outpacing. The Colorado State Athletic department presented its 2018-19 financial report to the Board of Governors last week, and some of the highlights included:

CSU’s $37.7 million partnership with Canvas Credit Union is driving the healthy numbers, helping pay for a significant portion of the $220 million on-campus stadium.

Bobo on Yahoo Hot Seat List. Mike Bobo made Yahoo Sports’ hot seat list, along with two other coaches in the MW. Of Bobo, author Pete Thamel wrote: “This is the best Group of Five job expected to open, as Mike Bobo slipped to 3-9 after three consecutive 7-6 seasons. Colorado State has bigger aspirations, and Bobo needs to establish quickly he’s the guy to help them reach those. The $5.5 million buyout is steep for any MWC school.”

New Mexico’s Bob Davie and UNLV’s Tony Sanchez also made the list while San Jose State’s Brent Brennan and San Diego State’s Rocky Long were “worth mentioning” (although Long was suggested as a potential retiree at the age of 70). Visit Yahoo Sports for the full story.

Facebook TV. Through a partnership with Stadium, the Mountain West will have seven games air exclusively on Facebook this season, which is the third consecutive year the MW and Stadium have partnered with Facebook. CSU, however, will not be one of those games. For the full list of MW games airing on Facebook, click here.

Dozen Telecasts: No need to have your games on Facebook when all 12 are on actual TV. CSU announced yesterday that AT&T SportsNet picked up the final two remaining games on CSU’s schedule — home dates with Western Illinois (Sept. 7) and UNLV (Nov. 2). That means all 12 of the Rams’ games will be televised this season. Click here for the full schedule. AT&T SportsNet picked up a total of nine MW games this season. Aside from the two regional games on AT&T SportsNet, the Rams will also appear on ESPN Networks six times (CU, Toledo, San Diego State, Fresno State, Air Force, and Wyoming), CBS Sports Network three times (Utah State, New Mexico, Boise State), and the SEC Network once (Arkansas).

Wide Receiver U. Last week’s Around the Horn mentioned the great preseason that Preston Williams is having. But don’t sleep on Bisi Johnson, the former CSU Ram drafted in the seventh round of the NFL Draft by the Minnesota Vikings. He caught two passes for 35 yards and a touchdown in his first preseason game vs. the New Orleans Saints. Sean Borman, managing editor for VikingTerritory.com, noted earlier in camp that Johnson is separating himself from the large group of young wide receivers. He found himself rotating in with the first team in practices leading up to Saturday’s preseason opener. Head coach Mike Zimmer pointed to Johnson as a standout when asked last week about the many young receivers fighting for roster spots behind starters Adam Thielen and Stefon Diggs. “Olibisi is doing well,” Zimmer told the Minnesota Star-Tribune. “He’s playing a multiple number of spots. Catches the ball well. Gets to the right place most of the time.”

Williams, by the way, had a phenomenal preseason opener also, catching four passes (including a couple jaw-droppers) for 97 yards, leading the team. Second-year WR Michael Gallup is slated as a Dallas Cowboys starter opposite of Amari Cooper, according to OurLads.com’s latest depth chart. Third-year player Rashard Higgins is the Cleveland Browns’ leading receiver after one preseason game thus far, catching five balls for 98 yards and a touchdown vs. the Redskins. He’s listed as a second-teamer behind Jarvis Landry.

More PW Praise. The NFL.com’s Greg Rosenthal had some pretty entertaining praise for Williams following his preseason debut: “On one hand, I’ve learned not to get too excited about an undrafted rookie wideout blowing up the first week of the preseason. On the other hand, DID YOU SEE WHAT PRESTON WILLIAMS DID TO THE POOR FALCONS?”

He continued: “He’s 6-foot-5, 218 pounds and made more eye-opening plays in one game than some recent first-round receivers (John Ross, Laquon Treadwell, Corey Coleman) have made in their entire careers. He fought for contested passes, showed great footwork on a sideline toe-tap and displayed serious juice on a one-handed grab down the sideline.”

Seriously, nobody spent a draft pick on this guy? Where you at Denver Broncos?

Next-Level Rams. CSU currently has 11 players on NFL rosters. Aside from the aforementioned four wideouts, here’s an update on the rest:

Running back Kapri Bibbs was released by the Green Bay Packers in June, and is currently a free agent. QB Garrett Grayson spent some time on the Denver Broncos practice squad before being released, and was recently called by the Atlanta Falcons to compete for a roster spot, but Grayson decided to step away from football.

Further Separation? Over the years, we’ve seen the gap continue to widen between the so-called Power 5 schools and Group of 5 Schools. Lately, there’s been chatter about Power 5 schools unifying schedules with more games vs. fellow Power 5 schools. Alabama’s Nick Saban was the latest to suggest it, telling ESPN last week that he would like to see schools from P5 conferences play at least 10 games a year against P5 foes and/or Notre Dame in the regular season, and he said his program is working to make that happen on future schedules.

“I’ve always said, ‘Let’s play all Power 5 games,'” Saban said. “I was in the NFL where we played all the games against NFL teams. But let’s play at least 10 Power 5 games. It would be better for the players, better for the fans, and I think you wouldn’t have to worry that if you lost a game that you wouldn’t have as much of a chance to still be in [the College Football Playoff]. They talk about strength of schedule now, but how do you really evaluate that?”

This is not a good development for schools in the G5 like CSU.

Dope Lids. Sports Illustrated came out with a list of the top 10 helmets in college football history, and it was a veritable who’s who list of college football blue bloods. And many of the selections were highly debatable, as the biases continue to run deep in college football, with no representative choices outside the Power 5 conferences. So, here are Around the Horn’s rankings of the best helmets (current main helmet, not factoring in alternates) in the Mountain West:

For full history behind each team’s helmets, check out the Helmet Project. It’s a fascinating site. 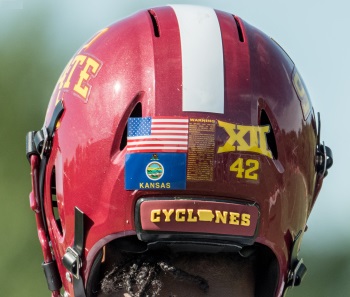 In-and-Out! Former MW member TCU recently announced beer would be available at Amon G. Carter Stadium this fall, but also announced that its popular re-entry policy was being scrapped, much to the chagrin of fans. Got me wondering if allowing CSU fans to re-enter Canvas Stadium would have any positive impact on keeping students around in the second half. As long as they still have their same ticket and a stamped hand (and are re-screened through security), I don’t see a downside to it. CSU students are notorious early departers, and if this helps give them a chance to return to their seats, why not. CSU will tell you that due to alcohol sales at the stadium CSU, they won’t allow fans to leave and return because of safety and liability reasons.

OOHRAH! In case you missed it Monday, take the time to read Mike Brohard’s story about junior safety Joshua Griffin on csurams.com. The 2019 walk-on is 32 years old — the oldest player currently on a college football roster — and is still on active duty in the Army’s 160th Special Operations Aviation Regiment, also known as the Night Stalkers specialized helicopter unit. Griffin says he could be called back to service at any time while he is attending CSU as part of the Army’s Green to Gold Program (which allows qualified, enlisted soldiers to return to college to receive their baccalaureate degree). Thanks, my man, for your service!

Please Support Our Sponsors! Please give your business to our generous sponsors who keep this website going. Ginger and Baker is one of the best dining spots in all of Fort Collins, with a fabulous restaurant, rooftop bar, bakery, and teaching area. Mighty River Brewing Co. is owned/operated by Dan Miller, a diehard Ram fan and long-time RamNationer…and you will taste the passion in each of his craft beers. Rams Book Store has been a sponsor since the very early days of RamNation.com, so if you’re in the market for CSU gear, please make them your first choice! We encourage you to regularly visit each of our sponsors, give them positive reviews on Google and/or Facebook, and thank them for their support of RamNation.

All previous Around the Horn columns can be found here.