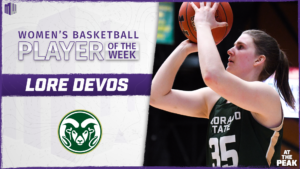 Rams’ forward Lore Devos, a 6’ senior from Belgium, earned Mountain West Conference Player of the Week honors as she averaged more than 19 points and 11 rebounds per game while leading her squad to a 3-0 week.  Lore recorded a double-double in all three games, a 2-0 sweep of conference foe San Diego State and an 85-62 non-conference win over local rival University of Denver.

The POY award, Devos’ first in her 4-year career, served as confirmation that she is back to form after suffering a serious knee injury in the first game of her junior campaign.