San Diego State isn’t the top program in the Mountain West by accident. So you had the feeling they were going to come out like a wounded animal after dropping the first of two games to CSU.

The Aztecs found a way to free up elite perimeter shooter Jordan Schakel early and often and he started the snowball rolling as he made 3 or his first four shots, propelling his team into an early 10-2 lead.

The hot shooting by San Diego State continued and was the Rams’ woes were further exacerbated by 12 first half Ram turnovers leading to 22 points for the Aztecs.

As Coach Niko Medved said, “Its hard to play good defense when your offense is initiating the other team’s offense.”

26 point deficit. Had them right where they wanted them after overcoming a 26-point deficit in the previous game

But it wasn’t to be as the Aztecs kept up their defensive intensity and Schakel continued his hot perimeter shooting. The Rams had a run to close the deficit to 14 but that was as close as they would get until the final minute.

Schakel would finish with 28 points on 8-10 shooting from beyond the arc. Some of it was CSU being a split second late, a lot of it was San Diego State running their offense sharper than the previous game and setting harder screens.

Said Medved post-game about Schakel, “He made his mind up that they weren’t going to lose tonight.”

The Rams got strong performances from stalwarts Isaiah Stevens and David Roddy and some strong contributions from the bench from John Tonje and PJ Byrd. Not enough to overcome the Aztecs on this evening, especially with the absence of Kendle Moore.

For the second straight game, Isaiah Stevens played all 40 minutes. The sophomore pre-season All MWC first-teamer was very much the defensive focus of San Diego State who shadowed him over the entire 94’. 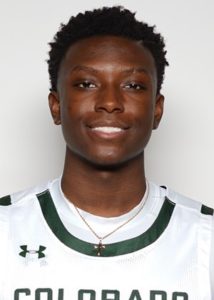 Stevens quietly delivered a near triple-double with 11 points, 10 assists, and 9 rebounds. He had a few careless turnovers early but settled in as the game went on.  Said Medved of Stevens’ performance after the game, “We’ll work with him to be a little more patient. But I have no doubt he got better this weekend.”

The Rams record fell to 6-2, 3-1 in the MWC. They’ll host UNLV at Moby for a pandemic pair on Thursday and Saturday.