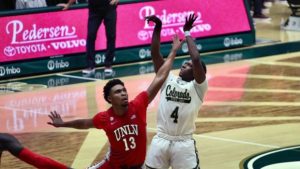 In the second game of a Pandemic Pair vs the visitors from Las Vegas, the CSU Rams once again showed their ability to close out games successful, delivering their second straight 3-point victory.  And if you can imagine any game being better than the late  7-point comeback win on Thursday, this game would have been it.

It may have been an early season conference game but it sure wasn’t played as one. Imagine a one-and-done tournament game and an NBA Playoff game wrapped into one. Imagine an offensive slugfest where every shot is going in regardless of how well it was defended.

When asked about it post-game, CSU Head Coach Niko Medved said, “It definitely had that feel. UNLV is well-coached and has a lot of great players.”

Here’s what he was talking about:

For the game UNLV shot 51% from the field. CSU shot 54% including 16-29 from the field, the second highest number of three-point makes in Moby all time for the Rams.

Nearly 75% of UNLVs points came from the dynamic pair of Bryce Hamilton and David Jenkins in one-vs-one parries. CSU’s scoring was more balanced as they had 7 or their 9 players drain a 3-ball.

UNLV’s largest lead was 3 when they led early in the game 11-8.  CSU’s largest lead was 8, which also came early as they went on a 13-2 run to lead 21-13. The rest of the game was played inside those margins.  Back and forth they went but just as it looked like one team would grab the game by its throat, the other team responded.

Back and forth they went, like two prizefighters getting punched but having too much pride to go down.

Medved and UNLV Head Coach TJ Otzelberger were also involved in the cerebral battle that takes place when you have two excellent coaches.  Otz having his team push the ball in a 2-for-1 situation to end the first half after walking the ball up the floor the entire half. Medved having his team play a 1-3-1 zone midway through the second half. Otz taking a quick timeout after watching his team struggle against said zone to get organized. Cat and mouse down the stretch.

CSU led 73-72  at the under 4:00 media timeout.  UNLV had some momentum having scored the last 5 after trailing 73-67.  When Hamilton calmly sank a pair of free throws, the Rebels had their first lead since the 10:21 mark.

It was short-lived as CSU’s John Tonje, a surprise starter in place of David Roddy, drained his third 3-ball of the game. Seconds later Hamilton tied it on a contested jumper. A miss and another midrange jumper by the Rebels’ Jenkins gave the Rebels the lead at 78-76 with 1:42 remaining on the clock.

It was 38 minutes of beautiful basketball by both teams. Doubtful it could get better.

But it did for the Rams as they somehow found another level of play beyond superb.

Point guard extraordinaire Isaiah Stevens missed a mid-range jumper but fought his way into position to rebound his miss. He found fellow sophomore David Roddy inside who scored over UNLV’s 6’11” defensive stalwart Mbacke Diong to tie the game at 78.

It was obvious that UNLV would try to isolate either Bryce Hamilton or David Jenkins for a potential game winner.  A lot of motion, a lot of screening, and finally a switch that put David Roddy on Hamilton. It was the ultimate showdown. Hamilton maneuvered left, right, back, forth but couldn’t create any space as Roddy showed that even at 6’5” 250-pounds he can guard the perimeter. The shot clock was ticking 5,4,3,2 and when Hamilton rose to shoot, Roddy stuffed him, creating a shot clock violation.

With 41 seconds on the clock, CSU called a timeout. You kind of had a feeling that it would come down to either Stevens or Roddy but they ran an action that created a perimeter look for Tonje. It was a good shot but one of CSU’s calling cards on offense is to unselfishly pass up a good shot for a better shot.

Stevens rotated to the top of the circle, Tonje found him. Stevens calmly rose and shot over the hand of the outstretched Hamilton.

Still a chance for UNLV and after trying to create an immediate look on the perimeter, Hamilton penetrated the lane and scored to Bering the Rebels within 1.

A borderline flagrant on Stevens by Hamilton where he spun him around, some words between the two stars, and then Stevens to the line for a pair which he calmly drained.

UNLV had over last chance. The ball was in Hamilton’s hands deep on the left wing and he launched an off-balance shot that rimmed out.  CSU’s Kendle Moore grabbed the rebound and the Rams were home.

Stevens once again delivered a spectacular performance with 22 points (6-8 from beyond the arc), 8 assists, and 6 rebounds in 37 tough minutes.  Roddy had 18 off the bench and also added 5 rebounds and 6 assists. John Tonje, making his first start in place of Roddy, had a career-high 15 on 6-9 shooting.

Jenkins would finish the game with 29 points on 13-19 shooting. I don’t think any of his makes touched the rim. Hamilton had 28, many of which were on spectacular and acrobatic drives and fall aways. Diong would score 8 and garner a dominant, game-high 15 rebounds.

But in the end, it was CSU’s five playing as one that allowed them to close out the visitors.  As Medved said after the game, “It took everything we had to get out of here with a win.”

As we learned the last game, Coffee is for Closers.

Double Expressos for the entire team!

Tonje Gets His First Start 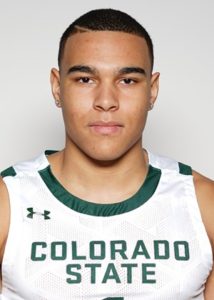 It was a bit of a surprise when the starting lineups were posted and John Tonje was listed in place of David Roddy. Not that Tonje isn’t capable. Its just that Roddy is such an integral part of what the Rams are all about.

When asked about if if was different getting the start, Tonje responded, “I approach every game the same. I do my best to help the team win.” He had gone 0-5 from the perimeter on Thursday so he came out post-game to get some shooting practice.  Saturday he was 3-5 from beyond the arc and CSU needed every one of them.

After the game, Medved revealed that Roddy not starting was an internal matter. “Nothing to be alarmed about,” he said.

With about 10:20 remaining in the game, CSU unveiled a 1-3-1 zone that they have practiced but not played in games this season.  Sometimes teams go to zone defenses because they’re tired or in foul trouble. In CSU’s case, it was a strategic decision to throw UNLV off-balance. It did so enough to cool them off and force a UNLV timeout.

Said Stevens on the zone, “It stalled them out a little. The 1-3-1 changed the game.” 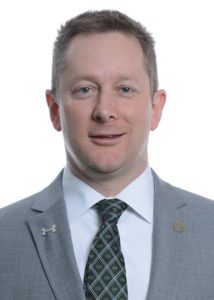 Once again the fans were robbed by the pandemic of being able to attend an absolutely fantastic college basketball game. But kudos to the players on both squads for playing at such a high level for a national television audience.  It was every bit as good as any game I can recall in Moby.

Medved was highly complimentary of UNLV after the game for being able to play that way so soon after being shut down for 33 days.

“UNLV is going to be a team that no one wants to play at the end of the year,” said Medved post-game.