Its a great day to be a Ram basketball fan!

I can sense that Ram fans who visit the RamNation.com site are starting to become even more engaged with the two hoops teams by the increasing number of comments. It’s taken a little bit of time but the dialogue is starting to build, driven of course by the quality of the two teams this season. Let’s keep it going!

In the meantime, I’ll do my best to share my thoughts regarding some of your comments, Before I do, I need to address the real question…

First let me present the evidence for your benefit and to give you some context. 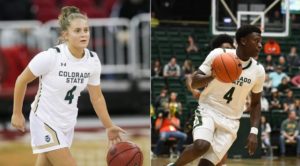 Joel and I hosted a 30-minute interview with the two point guards of the CSU teams last week — McKenna Hofschild and Isaiah Stevens.  You can scroll down my blog feed to find a link to it if you haven’t had a listen. I suggest you do, not to hear the extraordinary interviewing skills of Joel and me 😀😀😀, but to get to know both McKenna and Isaiah a little better.

Since the interview was conducted, here’s how they played last week:

McKenna scored a career-high 20 points in the first game against UNLV; she also added 8 assists and 4 rebounds. In the second game, she established a new career high, scoring 24 points, while adding 2 rebounds and 2 assists. For the two-game series she was a combined 16-for-34 from the field including 8-13 from beyond the arc.  She currently  is first in the MWC in assists and assist-to-turnover ratio, second in FG Percentage, and ninth in Scoring. With her performances, she is a strong candidate for MWC Player of the Week.

Isaiah led another amazing comeback in the first tilt with UNLV, scoring 25 while adding 6 rebounds and 4 assists. In the second game, he scored the game-winning three-ball, finishing with 22 points, 6 rebounds, and 8 assists. He was a combined 14-28 from the field including 9-14 from beyond the arc. He currently stands first in assists, 12th in scoring, and 14th in rebounding in MWC play.

Which of course had Joel and I joking about how it could be attributed to their appearances on the podcast earlier in the week.

And the evidence appears to be incontrovertible.

RamNation.com Podcast Karma must be real!

The truth of the matter is that I had the good fortune to see both Isaiah and McKenna play live as I have been covering the basketball beat for the site.

Everybody knew Isaiah could play based on what he accomplished last season on his way to being named MWC Freshman of the Year. I was able to see how much he has improved in those early appearances at Moby.

And seeing McKenna in Moby was a revelation. After watching methodical half court play from the CSU Women these past few seasons, it was pure excitement for me to see her lead a fast-paced approach from her point guard position.  Fast and feisty, undersized in stature but big of heart. A no-brainer in terms of where she is headed.

The talent of the two point guards is obvious. That’s why we wanted to get them on together for the podcast. Regardless of whether they appeared, they were still going to deliver for their teams at the highest levels. That’s who they are!

But that won’t stop Joel and I from joking about it and insisting its real. Sometimes you just have to play along in life and go with the flow.

Now, who should we have next?

Who wants or needs that RamNation.com Podcast Karma? 😀

[Edit: since publishing this blog Monday, Isaiah and McKenna were both named MWC Players of the Week!]

First I want you to know that this is not a game preview. Because I don’t do game previews anymore this season. I wrote one for the St. Mary’s game and you saw how that worked out. CSU produced their single biggest stinker that night in umpteen years.

And I hold myself responsible for that performance. It had nothing to do with the zillion turnovers or the fact that they couldn’t put the ball into the ocean. It was my fault for doing a preview. I take full responsibility and it wont happen again

Solid questions Shiner and aggieram76. I’ll try to address them together.

Nevada is a bit of a surprise team this season after losing their entire backcourt. Two reasons. Steve Alford is a very good coach. And they got immediate eligibility for point guard Grant Sherfield, who was originally committed to Alford at UCLA. Sherfield has immediately taken the reins of the Pack and is a top candidate for MWC All-Conference honors. Nevada is a big, solid team that defends well and finds just enough offense out of Sherfield and fellow transfer Desmond Cambridge.

Nevada is 3-3 in MWC games but just gave San Diego State all they could handle over their two games in Viejas. The first was a 6-point game. The second was a thriller where Sherfield hit a tough three-ball with 6 seconds remaining to tie the game, then the Aztec’s Trey Pullman hustled down the court and made a tough runner at the buzzer to win the game for the home team. It had very much the feel of the CSU win over Nevada last year when the Pack’s Jalen Harris nailed a three and Isaiah Stevens hustled back to score at the buzzer for the win.

As for Utah State, they also lost key players including Sam Merrill to the NBA. They return the best front line in the MWC in Neemias Queta and Justin Bean and haver surrounded them with useful players. Rugged in the paint, rugged on the glass, they’re big and punishing on both ends of the floor. They’re 6-0 against the bottom feeders of the MWC but winning by 30 points in those games. Utah State hosts San Diego State before hosting CSU in Logan. Thats a huge 4-game home stand for Utah State.

CSU will play a Pandemic Pair at Utah State next week, following a 2-game series with San Jose State in Phoenix. The Aggies will be a huge test. And there should be serious MWC ramifications as long as CSU takes care of business against the Spartans.

I don’t assume anything this season regardless of the quality of the opponent. San Jose State lost by 50+ to Boise State a coupe of weeks ago. Two nights later Boise scored a put back in the final seconds to beat San Jose State by 1! Inexplicable. Stuff happens.

That’s all for now.

Keep the comments and questions coming.