So grab your favorite cup of coffee, have a seat, and I’ll catch you up with some of my thoughts over the past week.

First let me start off and congratulate Shaquil Barrett and his Tampa Bay Buccaneers on a spectacular performance in winning a world championship. I’m a great believer that the great ones win at the highest level with multiple teams. Sure he had Tom Brady leading the way but I think it speaks volumes about the quality of Barrett that he played on a winning Denver Super Bowl side as a role player and then as a leader at Tampa Bay. 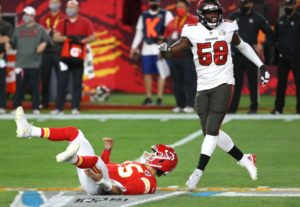 From a D-2 transfer to MWC Defensive Player of the Year to undrafted free agent to a pair of Super Bowl rings. The sports world needs more Shaq Barretts.

Look Who’s Moved to Second Place in the MWC Race 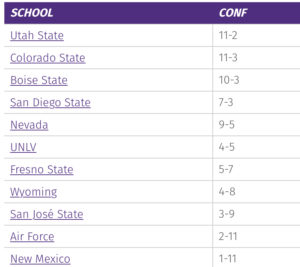 Over the weekend, Boise State dropped a pair of road games at Nevada, dropping them from the top spot all the way to 3rd place. Nevada is a young and improving squad and their dynamic backcourt of Grant Sherfield and Desmond Cambridge dismantled the Broncos in game 2 after winning on a late jumper by Sherfield in Game 1.

Nevada will now be crowned the ‘hottest” team in the MWC because we live so much in the moment. Just one week prior the Wolf Pack were swept in Laramie by the Wyoming Cowboys, another young team.

The same Wyoming Cowboys who were just swept in Laramie by Colorado State.

You’ve heard it before and you’ll hear it again. Winning a regular season conference championship is a marathon, not a sprint. Being the flavor of the week is not what gets you to the top. Winning game in and game out is what gets you there and it requires a culture committed to continuous improvement and with laser focus on the task at hand.

Can CSU get their collective noses in front by season’s end? The answer is yes but there are still plenty of games over the rest of February. A pair of home games with New Mexico, a pair of roadies at Nevada, and finally a pair of home games against in-state rival Air Force.

Every game a unique challenge. Every game a stepping stone for this remarkable young team.

The Lobos are suffering through their worst season in many years. Building a successful team out of a new roster full of D-1 transfers, JuCO’s, and freshmen was always going to be a challenge. Add in the challenges created by the COVID19 pandemic and throw some stringent restrictions placed on them by the State of New Mexico and you have an incredibly difficult set of circumstances.

The Lobs were not allowed to practice in New Mexico and were forced to relocate to another state in order to keep their season alive. They chose Lubbock, Texas as their home base initially. Practice time and home games at Lubbock Christian University, road trips around the league, occasional trips to Albuquerque for school purposes.

The Lobos were handed a shit sandwich and they have done their best to garner up the courage to move on and play basketball.

They were done wrong by their state officials, their administrators, their supposed leaders. They were forced to relocate to an area that had a higher incidence of COVID19 than their home in Albuquerque. That was completely irresponsible and a complete failure by these supposed leaders.

And now the Lobos are allowed to practice in Albuquerque but not play games. As a result, they’re establishing a base in Colorado with their next six games scheduled with CSU, Wyoming, and Air Force. Four are road games but it appears they will play their two “home games’ with Wyoming down in Colorado Springs.

The Rams completed a series sweep over their rivals from the North and pushed their way to the top of the standings. The Women’s race is a little more jumbled due to San Jose State choosing to opt out of the season which has created a very uneven number of games.

The Rams have already split with Fresno State and UNLV, both roadies. They host New Mexico this week in a pair of games that were originally scheduled to be played in Albuquerque. The UNM women have been operating under the same restrictions as their men have so their “home games” against CSU will be played in Fort Collins.

The results of these two games will go a long way toward deciding a regular season MWC title.

There were always going to be inequities when the decision was made to minimize travel and play games in pairs. Teams would have to embrace that.

So both CSU and Boise State Men somehow ended up playing 3 of the other top 4 teams on the road. In CSU’s case it was at San Diego State, at Utah State, and the upcoming at Nevada. In Boise State’s case, it featured roadies  at CSU and  Nevada with an upcoming roadie to San Diego State. Utah State got SDSU and CSU at home already and will play a roadie at Boise and a home series with Nevada.

Another quirk in the scheduling – CSU has roadies at all of those sites. By the time the regular season has concluded, CSU will have the highest road attendance in the MWC.

Bad luck you might say.  Not me. I say its awesome that people around the league get to see this special group of Rams with their high-energy offense and hard-nosed defense.

Having sat in empty gyms covering CSU games for RamNation.com, I can tell you that these crowds are more than welcome regardless of who has them. Piped-in crowd noise in sterile environments is not what college basketball is all about. Legitimate cheering, especially in rivalry games, is so necessary. The teams have learned how to create their own energy in sterile environments. Having live fans can only help advance the quality of play.

While on the Topic of Fan Attendance… 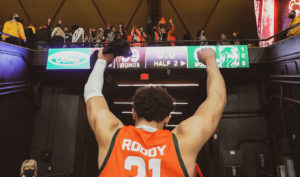 An estimated 200 fans(by Kevin Lytle, beat writer for The Coloradoan) out of the 1800 for Thursday night’s game. As many as an estimated 500 out of the 2000 that showed up for the Saturday matinee.

Fans and families were treated to an exciting pair of games. And a victorious David Roddy saluting them in resplendent Aggie pumpkin and alfalfa.