Looking resplendent in their special State Pride uniforms, (make that State PriDe with a capital D!), the Colorado State Rams scored an important victory in their quest for a Mountain West regular season conference championship.

For the second game in a row against the visitors from Colorado Springs, they did it by playing stifling man-to-man defense. They held the visitors to less than .7 points per possession, their lowest Offensive Efficiency rating of the season. It was an extraordinary effort coming on the heels of the previous meeting where they held the Falcons to what is now the 3rd lowest Offensive Efficiency rating of the season. 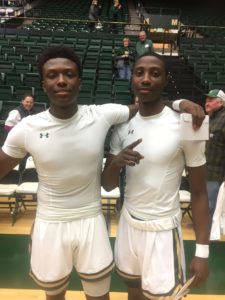 It was a complete team effort but there is no question that the leader tonight was junior guard Kendle Moore who was a fly in the ointment to the Falcons and especially their leading scorer AJ Walker. Moore was ubiquitous, harassing Walker in the backcourt, on the perimeter, and in the post. He did the majority of the work in holding Walker to his lowest offensive efficiency rating of the season. Walker finished with 7 points on 3-12 shooting.

As a team, the Rams forced 4 shot clock violations and held the Falcons to 33% shooting from the field while also forcing 18 turnovers.

And they needed it because it took awhile for the offense to get going. The Rams were 2-18 from beyond the arc in the first half. Most of them were wide open looks that they usually bury. Not tonight. In fact they led by only 26-23 at the half because they buried 8-9 free throws which came from poor Air Force close outs on perimeter shots.

But just like the previous game on Saturday, David Roddy kickstarted the Rams in the second half by attacking the rim. The Rams went on an early 16-3 run right out of the locker room and spent the rest of the game expanding the lead. 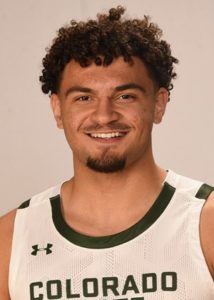 Roddy would finish with a game-high 22 points and he added a game-high 12 rebounds to complete a double-double. Isaiah Stevens added 15 points and Moore would get to double figures with 10 even with an 0-9m from beyond the arc.

With the win, the Rams moved their regular season record to 16-4 and their MWC record to 13-3. 13 wins in conference ties the all-time program high i any conference.

Next up – the New Mexico Lobos on Wednesday night in Moby.

But when the lights are on and the clock is running, Moore is a Tasmanian Devil of sorts. Scrapping for loose balls, sneaking into passing lanes, forcing turnovers, physically challenging opponents bigger and heavier than he is.

I asked David Roddy post-game who is tougher pound for pound and he responded that Kendle is. And then he paid him the best compliment of all.

”Kendle is the definition of a dog.”, said Roddy.

And don’t kid yourself. Moore picks up a ton of bumps and bruises with his style of play night-in and night-out. Describing the effort tonight, Moore simply stated, “We’re definitely going to be in the ice baths tonight.”

Post-game, Head Coach Niko Medved was effusive in his praise for his team’s defensive effort tonight. He also talked about some of the changes they made from the first game in how they defended Air Force.

His respect for Air Force Head Coach Joe Scott is very high. He knew that if he didnt change some things up, Scott would figure out ways to punish the Rams.

As Medved described it, “We changed our ball screen coverage tonight.  we wanted to keep them off balance.”

Part of the game within the game. And its nice to have the players that can adjust to these changes from game to game.

A Word of Caution

CSU had what Medved referred to as “a horrific shooting night”.

He trusts his players to take and make open shots. So much so that he would be disappointed if they stopped shooting them.

He was pleased that CSU had only turned the ball over 11 times after averaging 18 over the past several games.

But he also added, “The reality is if you want to play at the highest level, you have to do well on both ends of the floor.”

Kendle Moore was on the floor shooting perimeter jumpers post-game.  His 0-9 was an anomaly. He was going to do his best to never let it happen again.