The Colorado State Rams will be heading to Dallas for the 2021 National Invitation Tournament on Wednesday, in anticipation of a Friday first-round match-up with the Buffalo Bulls of the Mid-America Conference.

I’m not going to spend a lot of time doing a game preview other than to say that this should be a really entertaining and close game. 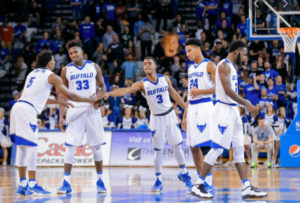 Buffalo has been a solid program since 2014 when former Duke great Bobby Hurley took over the program. By year 2 he had the Bulls in the NCAA Tournament. When Hurley left to take over Arizona State, an assistant named Nate Oats took over and took the Bulls even further. Multiple NCAA Tournament appearances, a first round win over Arizona in 2018, a 6-seed and first round win over Arizona State in 2019. Oats parlayed his success into the head coaching gig at Alabama.

So there’s quite a bit of recent history of national success at Buffalo. More than any recent Mountain West program when it comes to the NCAA Tournament.

The Bulls are now coached by Jim Whitesell (formerly of Loyola (IL)). They play fast as shown by their national ranking of 13th in Tempo. And they crash the offensive boards – 5th nationally which is higher than Utah State, the best offensive rebounding team in the MWC.

CSU likes to get out and run and if they can do a decent job on their own defensive glass, there should be some fireworks between the two schools.

SO there’s some of the technical things that you can look for.

But in this pandemic season, I like to talk more about the human aspects. And there are two wonderful stories that I’d like to highlight.

The CSU Rams have had limited chances to play in front of family and friends this season because of crowd restrictions. No one has been allowed in Moby and limited attendance has been allowed for road games. Some parents, some family, some friends have made the trek to Logan, Utah or Laramie, Wyoming to see their Rams play this season.

The NIT will be allowing attendance at the games, reportedly up to 25%. And no one can be more appreciative than CSU All-MWC point guard Isaiah Stevens who grew up and played his high school ball in nearby Allen, TX.

He’s already being hit up for tickets by family and friends. But more importantly, he’ll get to see them, maybe talk to them in the stands, and certainly play in front of them. 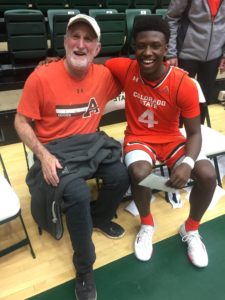 When asked about it, Isaiah replied, “I haven’t been back to Dallas ever since I left high school to play a game. Being able to go back to the MetroPlex to play is going to be really exciting.”

I’m sure the locals will be excited to see the 2020 MWC Freshman of the Year and 2021 Second Team All Conference player as well.

The Master, the Apprentice, and Some Fun Too

If you listened to the RamNation Radio broadcast a few days ago and the interview with Assistant Coath JR Blount, you probably heard JR talk about his days as a point guard at Loyola (IL) playing for Coach Jim Whitesell, whom he remains friends with to this day. 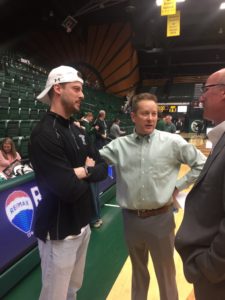 When asked about it, Niko Medved shared a bit of a funny story.

“I told JR he was going to scout the first team whoever we play. Five minutes later we find out we play Buffalo. Heck if we lose it’s your fault, heck you played for the guy.”

The banter continued as Medved talked about maybe putting in JR’s favorite play from his days at Loyola, “Let’s figure out whatever play they ran for you and we’ll run it.” before realizing that JR was more of a point guard who really didn’t have plays run for him.

Who knows – maybe they’ll still put something in for Isaiah Stevens called the JR Special.

I talked about the fast tempo that Buffalo plays at earlier. It is a far cry from the methodical pace that Whitesell had Loyola playing when JR was there.

It hasn’t gone unnoticed by Blount who commented, “Well I do know one thing (about Buffalo). He letting this group play a heck of a lot more than he let us.”

To which Medved replied, “He must have better players now.”

You gotta love this staff!

My sister went to medical school at Buffalo. So I guess there could be a bit of bragging rights associated with this game if my sister cared at all about college basketball. Which she doesn’t.

I will share with you probably her greatest memory of living in Buffalo, since it has to do with a recently popular topic of major snowstorms.

We got all worked up this past week in Colorado when 2’ of snow was predicted. 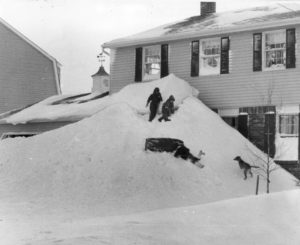 It was so bad that she was unable to leave through her front door. She was forced to climb out via a second story window and eventually they were able to dig a tunnel from the front door to the street.