I’m excited about the game tomorrow. It should be a good one. Very winnable if the Rams can get the ball into the paint consistently without turning the ball over.

There. That’s my preview. I haven’t done a full-blown pregame look all season since the St Mary’s game. I decided that the Debacle in Moraga was my fault for doing a preview so I just stopped.

So instead of a preview , I’m going to take you on a sentimental journey back to my college days to give you my glimpse at the best North Carolina State team ever.

Many of you have probably seen the highlight of the buzzer beating lay-in by Lorenzo Charles off an air ball to give State and head Coach Jim Valvano a national championship in 1983 over Houston.

That was an upset.

The 1974 National Championship was far from an upset.

I started to get a look at what was to turn into that team as early as 1971 when State came to Cameron to play a freshman game ( freshmen were not eligible to play varsity back then) . State had a skinny 7’4” center named Tommy Burleson who obviously could alter a game. Burleson was sent to the bench crying that night when he fouled out with State on the wrong end of the score. I’m not making it up. He cried. Because Duke’s Dave Elmer had torched him for 40 points.

My roommate played on Duke’s freshman team and his greatest memory of Burleson was the time he had a wide open jumper from the top of the key. He rose to shoot the ball when all of a sudden the 7’4” frame came from nowhere and the rim was no longer anywhere to be found. It was an eye opener for my roommate.

The following year we got our first look at the top freshman team in the ACC. Three players from that team would become varsity starters the following year. 5’7” Monty Towe, a spark plug who could shoot from anywhere on the court. Tim Stoddard, a 6’8” beast of a Power Forward. And then there was David Thompson.

6’4” and slender. Not the most assuming figure. But when the lights went on he became Superman. He was faster than everyone, could jump higher than anyone, could shoot inside and out.

Thompson played a lot of low post on that freshman team and was absolutely unstoppable. Dunking was not allowed back then. Had it been legal, he would have spent the entire game dunking on everybody.

For the 1973 season, Burleson, Towe, Thompson, and Stoddard were joined by a guard named Joe Cafferky, a feisty and skilled guard from the burbs of Philly. They rolled through the season undefeated. Unfortunately State wasn’t eligible for the NCAA Tourney. They had performed some shenanigans to get Thompson to Raleigh.

1974 rolled around and Cafferky had been replaced by
a slick guard by the name of Mo Rivers. They lost to UCLA in the regular season but advanced to the NCAA Tournament by winning what is considered the greatest game ever played in the ACC, 103-100  over Maryland in OT. It was win or go home back then; no such thing as at-large berths. 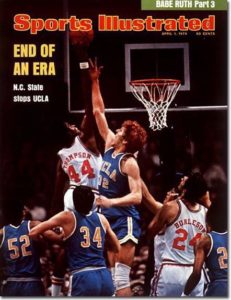 That 1974 team went onto gain revenge over a Bill Walton led UCLA in the semi’s and clinched the Natty with a win over Marquette. It was the only year Walton did not win a national Championship. Only his 4th loss over a career that featured a 71-game winning streak.

I have seen a lot of great college players in person in my lifetime.  David Thompson was the best of all of them. He had a great NBA career cut short by the effects of cocaine. Money Towe had a professional cup of coffee as Thompson’s caddie. Burleson had a nice NBA career.

And Tim Stoddard was the answer to one of my best trivia questions of all.

Who was the first off the 1974 team to win a World Championship ring?

The answer was Stoddard who went on to a 10+ year career in the MLB as a relief pitcher. He was on the World Series Champion Baltimore Orioles in 1983.

So thats my preview.

One more thing while I’m at it…

North Carolina State is a really good school. But back in our days at Duke, they were greeted with the following chant when they took the floor at Cameron:

So I hope you’ll join me in shouting loudly at the TV at some point in the game.