RamNation.com welcomed a long-time visitor (who at their request will remain anonymous) to share the story on their role in reconnecting former Colorado State quarterback Jack Graham with his alma mater, and how that led to a large donation, Graham becoming CSU’s athletic director, and ultimately him leading the charge for a new on-campus football stadium. We thought fellow Ram fans would enjoy the story. Graham is also co-owner of Ginger and Baker, who we’re proud to have as a sponsor to this website community! 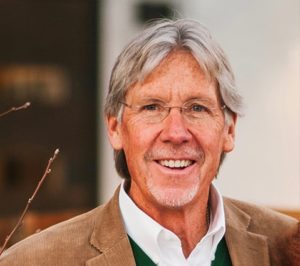 The House that Jack Built

On August 25, 2018, I drove to Canvas Stadium to watch the Rams play Hawaii. I lived elsewhere while it was under construction, but I’d recently moved back to Colorado, and this was my first visit to this magnificent facility.

As we entered the stadium, I turned to a friend of mine and said, “This is the house that Jack built.”

Of course, Jack Graham didn’t do it alone – thousands of Ram fans played roles in providing the political, community and financial support necessary for such a grand project.

I helped a little bit, too – eleven years earlier – thanks to a chance meeting with repercussions that kept getting bigger and bigger, eventually culminating in the construction of Canvas Stadium. It’s an interesting and unlikely story, so I thought other Ram fans might like to hear it.

My Dinner with Jack Graham

I met Jack just once, a long time ago, and I don’t remember every word of our conversation, but I’ll recount what happened to the best of my recollection. The basic facts are accurate, and there are others in the Ram community who can confirm that this is the true story of how Jack Graham was reconnected with Colorado State.

In 2007, I was a self-employed consultant living in Boulder. A friend of mine, whom I’ll call Damon, was a senior executive at ICAT, a reinsurance company founded by Jack in 1998 to provide catastrophe insurance coverage to business owners throughout the United States.

Damon asked me to meet with Jack because the company was looking for help on a project and he thought I might be a good fit. I have never worked in the insurance industry and told Damon he needed to find a consultant with more relevant experience. But he insisted and invited me to have dinner with him and some other ICAT executives at Jack and Ginger Graham’s home in the mountains above Boulder. I agreed.

One evening, a couple of weeks later, Damon drove the whole group of us up the long, twisty road to reach the Graham’s house. Jack gave us a tour of the large property, which included a greenhouse and a beautiful home featuring a large, flagstone patio on the back.

The view was gorgeous: the house was placed so that from the back windows or the patio, you could see down a large valley and, off in the distance, between two mountains, the lights of Denver twinkled brightly.

“It cost us a fortune to have them remove the mountain in the middle so we can see Denver,” Jack joked.

I’ve spent most of my career in corporate roles and I’ve been around a lot of senior executives and very wealthy people. Jack struck me as confident, extremely smart, down to earth, and quite social – he liked to talk, but he also asked a lot of questions. He had a dry wit and he smiled easily.

After we chatted on the patio for a while, Ginger came out to tell us that dinner was ready, and we walked into the large dining room that was adjacent to the patio. Jack sat in the middle on the window side, and he waved me into a chair directly across from him. Damon sat on Jack’s right and the others settled in as Ginger served the meal.

As we began eating, I asked Jack about his background.

“Well, I knocked around the NFL a bit,” he began, “but that didn’t last very long, and then I went into the reinsurance industry. ICAT’s turned out pretty well, and I’m still running it today.”

As an avid college football fan, I asked, “Where did you go to college, Jack? And what position did you play?”

“I played quarterback for Colorado State.”

He said it with pride and it’s a huge understatement to say I was surprised. I was shocked; it seemed like an amazing coincidence that this highly successful entrepreneur had played football at “my” school. After all, there are hundreds of colleges and universities with football teams, many of which send more players to the pros than CSU.

We all laughed, and then I asked Jack if he still had a relationship with CSU.

He shook his head. “I haven’t been to CSU for years. I don’t have any contact with the school at all.”

This struck me as odd, and I saw a potentially huge opportunity for CSU. Jack was obviously extremely successful and, as a former Ram quarterback, I wondered if he might be willing to become a significant donor to the program. But I didn’t say anything about that, of course.

Instead, I replied, “You should visit the campus sometime. I went to school there in the 1980s and it’s gorgeous now.”

He listened thoughtfully and nodded. “I probably should.”

And that was the end of our conversation about football and CSU. We spent the rest of our time together talking about ICAT, the project they were working on and my background. I didn’t do any consulting work for his company, but I enjoyed my dinner with Jack, Ginger and the ICAT team. The CSU connection was interesting, though, and I decided to pursue it.

The next day, I did a little research on Jack, and it was obvious that he had the resources to become a major donor to CSU. So, I emailed Joel Cantalamessa at Ramnation and told him what I’d learned. He was just as excited as I was and gave me the contact information for Mike LaPlante, who was then the Associate Athletic Director, Development. As part of his job, he had primary responsibility for major gifts. (Mike spent 15 years at CSU and raised an enormous amount of money for the school. He’s now the Vice President of Advancement for Western Colorado University in Gunnison; they’re very lucky to have him.)

I emailed Mike and he called me the next day. I described my meeting with Jack, what he’d told me about his background, and the surprising claim that he no longer had a relationship with CSU. Mike confirmed that this was the case: there was no record that Jack Graham had ever donated to the school.

I wished him luck and had no further contact with him for several months. But behind the scenes, Mike was busy reestablishing a connection between the former Ram quarterback and his alma mater.

“Jack Graham just made a major donation to the Athletic Department,” he said excitedly. “We’re really grateful to you for making the connection. Let me know if you’d like to sit in the Athletic Director’s box sometime or want game tickets.”

I was delighted; my dinner with Jack had really turned into something big for CSU! It was a fun anecdote that I occasionally told to friends, at parties, etc., but after a couple of years, I rarely thought about it.

And then on December 1, 2011, I was sitting in my office in Orange County, CA, where I traveled each week for work, and I brought up Ramnation.com, like I do almost every day.

Jack had been named the Athletic Director for CSU.

I couldn’t believe it. I spent the next couple of hours reading everything I could about the announcement, and I completely agreed with President Tony Frank’s statement that Jack was, “the perfect combination of dedicated Ram fan, stand-out athlete and experienced business leader with the skills and business acumen to energize and advance our overall athletics program.”

Leaders like Jack are transformative. They believe it’s inevitable that they will overcome any obstacle between them and their goals. So, when Jack announced that he wanted to build a new, on-campus stadium, I would have bet a lot of money that he’d succeed.

As opposition mounted, Jack responded with greater determination. He rallied support from alumni, the University, sponsors of all kinds, and the city of Ft. Collins. He was truly the perfect leader for CSU athletics in that moment and we simply would not have a new venue without him – particularly one as grand and beautiful as Canvas Stadium.

Like most Ram fans, I was disappointed when Jack was fired in 2014, but I can’t say I was very surprised. I have no insight into the relationship between Jack and Dr. Tony Frank – another great leader – but hard-charging, highly successful entrepreneurs aren’t wired to be employees. They need to be the boss, not report to one – no matter who it is.

Jack’s return to CSU is a reminder that we should all encourage alumni and other fans to support the school – the academic programs as well as the Athletic Department. CSU has helped many of us succeed in our careers; reconnecting others to the school is important and it’s a way we can pay it forward.

Every time I attend a game at Canvas, I feel a little proud of my small contribution in making it a reality – just like thousands of others who fought for the stadium, donated money, or committed to season tickets. It’s the kind of facility that brings prestige, entertainment, new students, and funding to the university.

Also, CSU didn’t just build a new stadium, they upgraded the pregame ceremonies and everything else – it feels very “big league” compared to attending a game at Hughes. It’s a whole new experience that reminds me of a Clemson game I attended several years ago.

Credit Where Credit is Due

I don’t tell this story very often – and I’m writing this anonymously – because sometimes people ask me if I’m taking credit for the new stadium. That question is annoying, and it distracts from the message about the importance of encouraging others to support CSU.

Also, the answer to the question is a resounding, “no.” By sheer coincidence and good luck, I happened to be in the right place at the right time. It seems like a “butterfly effect” moment to me. I had nothing to do with anything that happened after I contacted Joel and Mike. Tony Frank, Jack Graham, the Athletic Department, and thousands of Ram fans had the determination and passion to put in the hard work and raise the money that enabled CSU to build a gorgeous new stadium – on campus, where it belongs.

On August, 26, 2017, the Denver Post ran an article called, Jack Graham, man responsible for new Colorado State stadium, sees it for the first time Saturday. The writer describes how CSU fans constantly approach Jack to thank him for his leadership as Athletic Director and for Canvas Stadium. The headline and the fans are giving credit where it’s due: We were fortunate that we had a leader with the rare alchemy of talents required to envision something so bold and then make it come true.

Canvas Stadium is a grand, gorgeous, and well-designed venue. It is, and always will be, the house that Jack built.