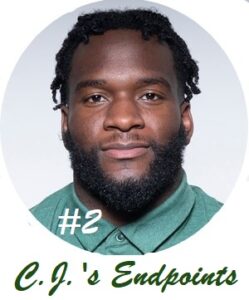 Each week Colorado State defensive end C.J. Onyechi will share his viewpoints on the team’s performance, as well as the upcoming week. He’ll also be joining this week’s RamNation Radio to chat more in depth. Learn more here on how to contribute to RamNation’s NIL fund for C.J. and future student athlete partners.

The Rams dropped to 0-2 after a home loss to Middle Tennessee. Are you discouraged or still feel good about what the team can do this season? And what is the team’s overall mentality going forward?

First things first, I will never be discouraged with our team no matter the outcome of any game. This is only the beginning of this season and I am optimistic on the future of this team and this program. The team’s mentality is to fix our mistakes and get better each week and that is exactly what we are doing. Saturday is going to be another test for us on the road, so we are putting all our efforts into performing how we are capable of.

The defense registered just two sacks and two QB hurries. You mentioned after last week’s one-sack performance vs. Michigan that the unit was behind in its sack goals for the season and needed to pick it up. What in your opinion is causing the lack of pressure and what needs to be done to improve in that area?

Our defense hasn’t been put in the easiest situations the past two weeks, so we haven’t been able to open up our playbook like we want to. Also, the past two weeks offenses were getting the ball out fairly quickly, which has limited our pass rush. The only reason I said we were behind was because of my high expectations for our defensive line. I feel we are playing well, but we can and will be even better.

You personally had another nice game – in on 9 tackles including one for a loss. How do you assess your own performance and what grade would you give the defense overall?

I thought I played well; however, I left a lot of plays out there on the field. After reviewing the game, there were plays that I could have made to change the momentum in the game. I’m heavily critical on myself and I feel that’s the only way to get better in all aspects, not just football. As a defense, we played better than the stat sheet showed. Some plays got away from us, but I think our defense stepped up when we needed to.

For a defense that has given up 8 touchdowns and 70-plus points in two games, it actually has looked really good at times also. What do you see the defense doing right, and what is going wrong?

I think our defense is doing a lot of things right. For one, I feel we communicate at a high level out there without having to resort to ripping on one another. We also have harped on running to the ball, which I think has showed up a lot for us during the games in limiting big plays or touchdowns. What we are lacking right now is complete trust in the plan which is to be expected with a new defense. We have had moments where we have trusted our plan and things ended up in our favor, but we have to make that become consistent and happen every play we are on the field.

The offense had a nice spurt in the third quarter to put up 19 points, but other than that could not sustain drives, thus leaving the defense on the field for a long time. How does that affect you guys on defense?

As a defense we focus on “controlling what we can control.” I believe the offense is doing their best given the circumstances, so the only thing we can do as a defense is encourage and motivate them. In regard the question, we realize our offense is an air raid style offense, so we expect for them to take shots and to take risks. However, a good defense must be ready to stop the other team no matter the situation. I see it as another opportunity to make plays and get the ball back to our offense.

How was your first experience playing a game at Canvas Stadium?

I loved the game day environment! I wish the weather wasn’t so gloomy, but I had a great time nonetheless. My family made the trip from New Jersey so I’m glad they got to share in that experience in me. I will do everything in my power to make sure our next game at home ends in a W!

A lot of fans left early in the second half and there have been some vocal fans on social media about the performance. What would you tell fans about the game/loss…and what can we all expect going forward?

What I’d like to tell the fans is to bear with us!  I would like to remind them that it takes time to build a successful program and big part of a football program is its fans. In order for us to become that program we all want CSU to become, we urge the fans to ride with us even when the results aren’t in our favor. We plan to be a team that the whole CSU community can be proud of.