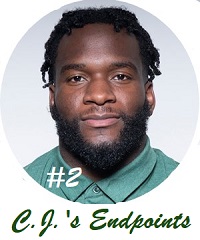 First, we appreciate the way you show up each week and provide this content for us. We know it can’t be easy to do it loss after loss, but you always put in full effort, just as you do on the field, and we thank you.

Thank you for giving me this outlet to share my feelings and helping me curate this passion into something great and fun, but also informative and meaningful to the CSU community.

Air Force, with its unique offense, is a team that you guys spent time in fall camp preparing for, in addition to the game-week prep. After all the prep, film study, etc., what was it like actually facing that offense on the field?

I believe we were prepared mentally and physically, but we didn’t show that throughout the whole game. To beat a team like that, you must have that killer mentality all game and at times we let it slip. Their offense is everything we thought it was going to be. Mostly run. Trick plays. Max protection pass. Everything we practiced for they threw at us. There is a reason that Air Force still runs that offense to this day. It works. Even when you are disciplined and sound in stopping the run, their offense wants to wear you down by getting little gains of 3 or 4 yards, and they bank on breaking a couple long ones. When those little gains add up, it was very frustrating for our defense. When we started having success, their offense started making mistakes, and we have to learn how to capitalize on those mistakes.

Air Force had 0 passing yards in the game. Haaziq Daniels was 0 for 2 passing in the game. But the Falcons rushed for 373 yards. What makes it such a challenge to stop their run when you know it’s coming every play?

They have different run schemes out of similar formations so you have to stay true to the call and not anticipate a certain play, because that could lead to them breaking a run, which they did a couple times throughout the game.

Air Force came into the game averaging 29.5 points per game. You held them to 24. What was the defense doing well?

We were playing with intensity and a lot of energy at times in the game, and Air Force definitely felt that. There were a couple fights that took place in the game, which is natural when you play a sport like this, but it was intensified this game because of the rivalry and the mindset we had. With the intensity we played with you could see their offense getting fatigued and slowing down.

You personally had a monster game with 10 tackles, a sack, and a fumble recovery. Can you reflect on your performance for us, despite the disappointment of the loss?

At some point in the game, I realized most of their runs were coming to me. I don’t know if it was a sign of disrespect or was just coincidence, but I took it as disrespect. Maybe they figured I wasn’t used to an offense like this from their scouting report, but I made sure I was a factor in every play I was out there. I started to get in a groove and ended up having a good performance. But I couldn’t have had a great game without my brothers playing to the left and right of me doing their jobs.

With one game left, and the team sitting at 2-9, how do you view this season? You came across the country to join this rebuilding program. Are you still happy with the decision?

Absolutely. As a human the thoughts of “what if” always come to your head, but every day I come into the facility and see my brothers, those thoughts immediately fade away. I knew what I was coming into. My whole career, I’ve been in rebuilding programs, from high school to both my college programs. Some may just say its coincidence, but I believe God puts me in situations like that to face adversity and try to leave the place better than I found it. It’s sad that I won’t be a part of the team to see us at the top of the Mountain West, but I assure you that is the direction the CSU Rams are heading under Coach Norvell’s leadership. This season was a free trial before the real subscription, I like to say. I say that because during a free trial you see what the app is all about, find out all its potential but when that trial is up, you get full access to the BIGGER and BETTER things the app has to offer. The CSU Rams will get BIGGER and BETTER from this season, I’m sure of it.

How important is it to go out with a win this Friday, and what are your keys to beating New Mexico?

Its important for our program and for personal reasons. In regards to CSU, we are playing a New Mexico team with the same 2-9 record. This game is to show how we will be in the future. We must end in a positive light, to show the road ahead is bright. Personally, I want to end my college career with a win. I wasn’t fortunate to play for a bowl game or win a trophy my whole career but at least I can look back and be able to say I won my last game!

Friday will be your last collegiate game. What will your emotions be, and how do you stay focused on the task at hand?

It’s bittersweet, but I’m excited for the future. The whole family is coming up so it’ll be fun seeing them out here and spending my last days in Colorado with them. It honestly makes me more focused. I want to put a show on for the fam. They’ve been tuning in to all the games on TV, but it’s different when they are there live. I’m more locked in than ever.

You’ve mentioned you want to leave the program in a better place. We’re all seeing signs of that, despite the record. In your eyes, what are some of the specific areas you believe this team has done that?

I believe we have been making strides to be a better team. One area we have improved tremendously is special teams. I believe the focus on our special teams has grown and will continue to grow. Our mindset defensively has grown stronger and forces the defense to focus on its job no matter what else is going on. And most importantly, the trust is growing from player to the coaches and also player to player. I can’t wait to see what the future holds.

Have a Happy Thanksgiving, C.J.!