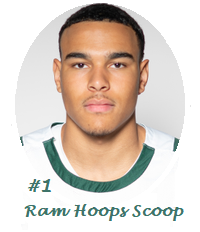 The team is 8-8 halfway through the season. That’s not something you or most of the guys on the team are used to. How is the team’s psyche currently and explain how the up-and-down season taken a mental toll on you guys?

It is new but it is the reality that we have to live with at this point. We have had some good games and also some bad ones, and our record is something that we have to live with, good or bad.
Every game and every day is a new opportunity so when there are two opponents facing each other the records don’t matter its all about who plays better that night.

Clearly the injuries/illnesses have had a negative impact on this team. Six guys have missed extended practice and game time at points during the season. Can you talk about how the lack of continuity is affecting the team?

It has been tough to see so many guys deal with things that take them off of the floor, especially me being a constant this year so far, luckily. I have missed one game due to injury and I know how tough it is to have to watch the team from the sideline so I feel for those guys. Unfortunately for the team, these have been huge contributors we have missed out on, so we have not been at full potential yet this season.

In your time as CSU, the team has been remarkably consistent, and had never lost more than two games in a row. The team is now on a four-game bender. Why?

We have been on a losing streak because we have been trying to find ourselves. In my time here we have not battled with nearly as many injuries to key guys, and it is just part of basketball that we have to live with. For us on the court, we have to pick it up, and I feel that that starts with me. I have to be consistent defensively and on offense to maximize our potential and I completely own up to it.

We have to make sure our defense doesn’t lose energy just because shots aren’t falling on offense. It has been a big theme of ours to have spirit regardless of what is happening, and as of late we have not had the right mindset, which leads to not giving up runs and having the grittiness to get those crucial stops.

Multiple guys have struggled shooting over the past few weeks, particularly from outside, averaging under 30% in the past five games. What do you attribute the teams’ shooting slump to and how do you shake out of it?

Poor shooting often stems from bad shot selection and/or not making plays for others, which I own up to a part of that. I have watched film and had conversations with coaches about being a better playmaker and I have no doubt we can shake this spell. For me I like to get in the gym alone to sort of recalibrate my shooting slump.

Similarly, opposing teams seem to have great outside shooting nights against the Rams. In that same five-game span mentioned above, opponents have averaged 46% from behind the arc, with New Mexico shooting a season-best 60% from three. It can’t just be bad luck that these opponents are getting so hot against the Rams, can it? What can the Rams do better to make outside shooting more difficult for opponents?

Yes, teams have shot well from the three, but that is no excuse for us to just accept it. There are ways that we can be better, especially in knowing personnel and giving appropriate help in situations, and not over-helping and being out of position for kick-out threes that have been hurting us. Also, perimeter defense has to be better in not allowing drives and ultimately kick-out threes from the drives.

You and fellow senior Isaiah Stevens have had great careers and are two of the building blocks that built this program from the ground up. How do you ensure that this season turns around and your careers don’t end on a lackluster note?

We have to address the problems and improve on them day by day. We approach every day as a new day — on a winning streak or a losing streak — so we have to believe in ourselves and the team. We can only control what we can control and be the best version of ourselves. I have the utmost belief in myself, Stevens, and the team as a whole.

This team in previous years has always had a knack in closing halves and games strong. It’s essentially been the opposite this year. What do you think has changed?

Closing games comes down to minimizing crucial mistakes and making plays, which is something we have struggled with as of late. I think we have to all be on the same page and limit late turnovers, as well as take good shots and execute game plans. We have the right guys on the team that are willing to sacrifice and give everything we have in those final stretches going forward.

Last year, you guys faced pressure in every game to win and stay ahead of the NCAA Tournament bubble and ensure you played your way in as an at-large tourney selection. At this point, this team would not be in any consideration for an at-large bid. Does that take some pressure off, knowing you guys have the next couple of months to find your groove and try to make a run in the Mountain West tournament?

You can say that pressure is taken off, which is not necessarily a good thing, but also not bad. It is never bad to be an underdog in games we would not have been in last year, but I feel that that gives us even more motivation going into games than if we were “expected” to win.

You get a pair of home games against Fresno State Saturday and Air Force Tuesday. What do you need to do to beat them?

I think we have to learn from mistakes from previous games and know that we are at our best when we are playing hard for each other. We have to have short-term memory, win or lose, in an always-moving college basketball season. Fresno State is athletic and a good defensive team, and we have to be on our ‘A’ game offensively in not letting them slow us down. As for Air force, they have a unique offense that we are going to have to alter some of our defensive basics that we have had from the beginning of the year to give ourselves the best chance.

Fresno State came off the best performance of their season a few days ago with a win against previously unbeaten New Mexico. But the Rams played one of their most complete games of their season. What was working for you guys?

We played for each other and left it all out there, making play after play on both ends. Fresno State was coming off of a huge win and we had to make sure we didn’t fall into the same traps that other teams have when dealing with Fresno’s pressure. We got good looks from three, and our post players really fought and gave the guards good looks from three as well. Pat Cartier stepping out and making some for himself was also big.

After a rough stretch defensively in recent games, the Rams clamped down on Fresno State, keeping them to 38.8% shooting (and just 34.8% from three). What did you guys do differently defensively?

We had our mind made up that we weren’t going to let it be the same story every night. We really keyed into the game plan and continued to make the next play when a mistake was made. I’m proud of our defense tonight and I’m expecting this to be the way we approach every game from here on out.

The Rams had 13 assists on 14 made baskets in the first half. How important was it for you guys to share the ball in this game?

Making plays for others is how we play when we are at our best. We knew being unselfish was our best chance at beating a team like this and it worked out tonight. I loved how we played this game for each other and we have to continue to play like this to give ourselves the best chance going forward.

Coach Medved praised the team after the game for preparing well for today’s game. What does it say about you and your team that you guys refuse to fold and continue fighting after a slump?

I think it just goes to show the ownership and accountability we have as individuals and as a team and it speaks volumes — especially after dropping the past few games. We have to have a chip on our shoulder and give our best effort day in and day out to be satisfied with the results which we were tonight.

John is a senior leader out of Omaha, Neb. and one of the top scorers on the team. He is considered one of the founding building blocks that has turned around the men’s basketball program. He is a major in Business; Finance and Real Estate; Business Administration. He also has an interest in fashion design and is starting his own clothing line. You can read all his “Ram Hoops Scoop” features here.