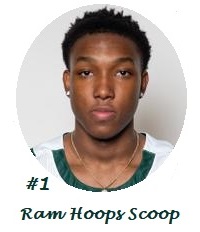 Throughout the 2022-23 basketball season, Colorado State freshman guard Taviontae Jackson will share his viewpoints on the team’s performance in recent games, preview upcoming games, and more. Learn more here on how to contribute to RamNation’s NIL fund for Tavi, fellow basketball NIL partner John Tonje, and other student athlete partners.

First, congratulations on an amazing win at UNLV. Have you ever been a part of a game like that?

I appreciate it, and man, I’ve never played in a game that was similar to that one. The atmosphere in there was just totally crazy, and I’ve never seen anything close to how the game played out in the end. Isaiah, with those clutch shots, was just amazing. Crazy how we can be rewarded when we play our hearts out until the end.

The team stayed in Las Vegas a night after the game. What was the post-game celebration and evening like that night?

I’m from Las Vegas, so I went to celebrate with my family after the game, but some of the team went out to eat after and walked the strip for a bit. From what it seems, they were having a great time.

From what I heard there were like 150, or something like that, family and friends in support and that’s something I was not expecting at all. There were people I hadn’t seen in years at the game. It was just all-around crazy. It was definitely great to get that win. I was so hyped after the game. It was an amazing feeling for sure.

Many Ram fans are saying Isaiah Stevens’ game of 33 points, 9 assists, and 8 rebounds atop all historical CSU performances, not just because of his stat line, but because of the multiple huge timely shots he made. Where does his performance rank on games you’ve been a part of at all levels?

To be so honest, I’ll say first for sure. I’ve never seen anyone perform like that since I started playing basketball, which was eigth-grade summer, and I’ve played in some big games and seen crazy things happen. But what I seen him do against UNLV was just mind blowing. So yeah, first for sure.

When you came on our podcast earlier this season, you talked about learning from Isaiah Stevens. What are some of the key things you’ve learned from him so far this year?

I’ve learned how to control the game in a better way and really just see the court differently. When I first came here I was always moving too fast and I’d always get told to “slow down”. So, yeah, one of the main things I’ve learned from him this year is how to control myself and the pace during the game.

Over 17 games, UNLV has forced 341 opponent turnovers (20.06 per game), which ranks second in the nation. You and Isaiah Stevens combined for 15 assists compared to only 4 turnovers yesterday. How were you able to take care of the ball against a good defense, and what does that stat say about CSU’s backcourt?

We just stayed solid and kept our composure, not letting their defense speed us up, and played strong with the ball. That stat says and means a lot. It shows how locked in we are and winning means a lot to us.

The Rams have been undersized in lot of matchups this year, and thus, has been outrebounded in the majority of games. However, vs. UNLV, a team with a lot more height/length, you guys were able to win the rebounding battle (39-38). What was the difference Saturday night?

I feel like we just played with an edge and brought the fight to them instead of letting them bring it to us, We were being physical and locked in to what we needed to do in order to be successful.

How was this team able to shake off the disappointing home loss to Air Force and go into a tough place to play and come out with a win?

We didn’t let the loss bring us down. Instead, we kept our heads high and kept pushing forward cause we know we are better than how we are performing, and everyone knows what this team is capable of.

It doesn’t get any easier as No. 23-ranked San Diego State comes to town Wednesday. Based on film and preparation, what do you guys have to do to give you a chance to beat the Aztecs?

We have to match their physicality, make sure we stay solid on defense, be strong with the ball, and just like any other game, we have to rebound.

Tavi is a true freshman out of Las Vegas, Nev. and has immediately integrated himself as an impact player. He is a currently a major in Communications and also has an interest in Business. You can read all his “Ram Hoops Scoop” features here.