In the second game of their very first MWC Pandemic Pair, the Colorado State Men’s Basketball team made short work of their opponents from the Valley with a pulsating first-half performance as they completed the sweep.

They ran out to a 41-17 halftime lead that could easily have been more. It began with what is becoming their trademark, a halfcourt defense that forces contested shots, creates turnovers, and grabs the missed shots.

From there it was blinding pace in transition to create fast break opportunities. And when the early looks weren’t there, they seamlessly transitioned into their halfcourt sets.

What felt like a focused gameplan approach was much more. It was really more the essence, the DNA of what Coach Niko Medved and crew are trying to deliver night-in and night-out.

And you would have been hard-pressed to find more than a shot or two in the first half that wasn’t a great shot. The Rams shot 12-22 but most of the misses were great looks at the rim or wide open shots from the perimeter. The kind that a great shooting team will bury on most nights. The kind that create leads even greater than 24 points.

The game had an air of inevitability as the second half began and the lead fluctuated between 20 and 33 points before the final buzzer. A bit of a sloppy start forced Medved to call a timeout to refocus his team and they obliged as they continued to push the pace when possible and deliver out of the halfcourt as well.

David Roddy delivered another double-double with 17 and 11. Guard PJ Byrd came off the bench to deliver a career-high 14 points. Freshman Isaiah Rivera also recorded a career-high 11 points along with 6 rebounds and 3 assists. Orlando Robinson led the way for the Bulldogs with 19 points and 15 rebounds.

With the win, the Rams moved their record to 5-1 and 2-0 in the MWC which has them tied at the top with Boise State and Utah State. Next up – a trip to San Diego for a match-up with the pre-season conference favorite Aztecs. 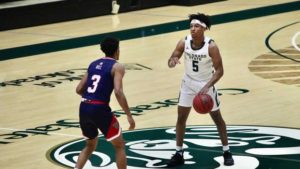 PJ Byrd got limited minutes last season, his first in Fort Collins after transferring from VCU. He has a more prominent role this season in spelling Isaiah Stevens at the point. His trademark is tenacious, physical defense and he’s adept at drawing charges. His 14 points came on 2-3 shooting from beyond the arc and 8-8 from the free throw line.

When asked about scoring a career high, Byrd said “I dont worry about scoring. It did feel good to help the team.”

Byrd’s performance was just one of several solid performances off the bench made necessary by early foul trouble to starters Kendle Moore and Dischon Thomas. The Rams got the aforementioned 14 from Byrd and 11 from Rivera as well as 8 from John Tonje and 7 from James Moors. Nearly half the points came from the bench.

Roddy’s 17 and 11 was big but Robinson’s 19 and 15 was even more impressive. On a team that is challenged offensively, Robinson is very much the centerpiece of any opponent’s defensive game plan. 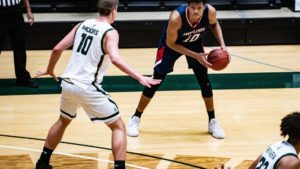 Roddy drew the defensive responsibility of guarding Robinson when CSU went to their small lineup. Roddy described him as “a really good, talented player. He really attacks the glass, he’s super physical and strong.”, comparing those attributes to Carvacho.

And the Stat Stuffer of the Game Was…

Best known for his 3-point shooting, Thistlewood was described by his head coach as “one of our best defenders in these past 2 games”. Not something you would have heard in the previous two seasons when he might have been considered more of a liability.

His line for the game – 9 points, 4 rebounds, 1 assist, 1 steal, 2 blocks, and 1 drawn charge in 31 minutes. Remarkably he was 0-4 from beyond the arc. Which prompted a little post-game work.