“Around The Horn” is news feature resurrection from the early days of RamNation.com. We take readers around the college athletics world, as it relates to Colorado State and the Mountain West Conference. This one is brought to you by Ginger and Baker, whose sponsorship allows us to add new features and original content to the site. Please support them! 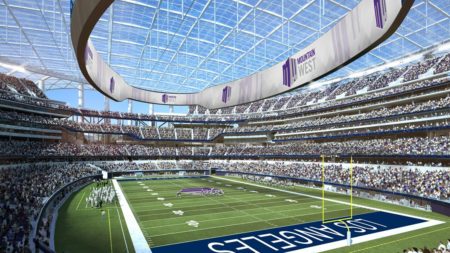 MW Champ to L.A. Losing the Las Vegas Bowl certainly hurts, but replacing it with the brand-new Los Angeles Bowl in 2020 vs. a PAC-12 team through 2025 is a nice alternative. The L.A. Stadium at Hollywood Park looks like a gem in its own right. The bowl will have the first selection from the MW. The MW will have six guaranteed bowl berths in the new cycle, including the Potato Bowl (vs. MAC), New Mexico Bowl (vs. C-USA), Arizona Bowl (vs. MAC), Hawai’i Bowl (vs. AAC or C-USA) and an ESPN Events-operated bowl game, likely to be held in the Dallas-Ft. Worth Metroplex. The MW also has an arrangement with the Cheez-It® Bowl (Phoenix) for the MW to send a representative should the Big Ten or Big 12 fail to have enough eligible teams, as well as a similar deal with a yet-to-be-announced bowl game.

MW Lags in Departure Fees. According to the Hartford Courant, UConn will pay a $17 million exit fee in their departure from the American Athletic Conference for the Big East. Apparently the AAC started negotiations at a $30 million buyout, while the Huskies’ initial offer was $15 million. (The two sides agreed on the lesser amount as UConn agreed to schedule at least four home-and-home basketball series, men’s or women’s, with American opponents as it pays off the debt.) By contrast, to leave the Mountain West, a member school would only have to pay $5 million if it resigned prior to June 30 of that year, or if done after that date, would forfeit its final year of conference revenue and pay the conference either $5 million dollars or double the amount of the final year’s revenue, whichever is greater. Here are how some other recent departures compare: Temple paid $6 million to leave the MAC to rejoin the Big East in 2012, Pitt and Syracuse paid $7.5 million to leave the Big East for the ACC, West Virginia paid a whopping $20 million to leave the Big East early, and Missouri and Texas A&M each paid $12.4 million to leave the Big 12.

Playoff Expansion on the Horizon? CSU, or any other team, doesn’t have to concern themselves with any additional conference realignment for the foreseeable future, an unnamed Power 5 AD told Horns247.com. The source said he believes there’s a better chance of the College Football Playoff expanding to eight teams in the next five years than any more significant Power Five realignment. “In my opinion, the revenue/cable model has and will continue to change, so conference expansion is not as desirable as in the past,” he said. The source said the most likely scenario would see the Power Five conference champions getting an automatic bid, with an additional two at-large bids, and one at-large bid going to the Group of Five conferences.

Group of 5 Teams Will Have to Wait a While For Auto-Bid. How fast could playoff expansion happen? It would likely take at least two to three years after the decision was made to expand, Bill Hancock, the College Football Playoff’s executive director, told the Paul Finebaum Show this week. “There’s no way college football could decide on an eight-team Playoff in January 2020 for instance and have the system in place the following football season. Logistically, it wouldn’t work.” He noted that the first-ever playoff game happened three years after the conversation started. The adoption of the CFB Playoff in 2014 has brought millions in revenue to participating schools, and seemingly increased the sport’s popularity nationwide, but has also been surrounded by controversy in omitting contenders and non-Power 5 teams. This potential timeline gives the Rams some extra time to get their act together.

Larger TV Contract Expected. At last week’s Mountain West Football Media Days, Commissioner Craig Thompson said he’s “very confident” the new TV rights package will result in a significant revenue increase from the existing $1.1 million that most of the league members are receiving (Boise State has a separate deal that net them close to $3 million last year). Estimates are that schools will receive closer to $2 million per year. Deals won’t be finalized until later this fall, and take effect July 1, 2020. But two of the most widely discussed aspects of the negotiations are kickoff times and online video streaming to be a significant part of the deal. Most conferences recently undergoing TV contract negotiations are leaning towards shorter contract lengths due to the vastly changing TV landscape, as nobody wants to get locked into a deal through 10 years from now when nobody knows what TV is going to look like by then.

In an interesting Q&A on Athletic Director U., former CSU Athletic Director Jeff Hathaway (most recently Vice President / Director of Athletics at Hofstra University before retiring last year) discussed TV and the evolving college athletics landscape with Big 12 Commissioner Bob Bowlsby. Regarding everyone’s challenge with today’s fans and television, Bowlsby said he believes there will always be a strong market for live content. “Delivery systems, the migration to OTT consumption and mobile device consumption, it’s almost impossible to fathom that the iPhone didn’t exist 12 years ago. Think of the way it’s changed our world and the way especially young people consume their sports. We can all count our blessings that live content continues to be the coin of the realm and as long as we have live content, there will be people willing to pay us to acquire it. So, I don’t see the funding rug being pulled out from under us. I think it’s going to evolve. Cable is getting marginally smaller, but at the same time, mobile is growing geometrically. All of it has been driven by live content. As long as you own live content, I think there will be platforms available who are willing to pay you to acquire it. Let’s hope the MW finds the right balance for the schools and the fans. Much more…

CSU on the NFL Network? While the MW is in discussions with current TV partners, ESPN and CBS Sports Network, plenty of other options are on the table. The Sports Business Journal reported that the NFL Network is interested in a deal with the Mountain West to broadcast games in the near future. The network recently struck a deal to air 10 C-USA games starting this season.

Empty Seats. Of the 130 FBS football programs, four MW teams were in the bottom 25 for stadium fill rate in 2018, according to an analysis by FBSchedules.com.

Canvas Stadium to Be One of Three MW Stadiums Running Medical Replay System. CSU will become the third member of the Mountain West to experiment with a medical-replay system for the 2019 season at Canvas Stadium, according to the conference. The MW has been partnering on this initiative with a company called Sport Scope with Air Force for the past five seasons and Boise State starting this year. CSU will partner with DVSport. The medical replays can be used to help trainers diagnose injuries and are particularly helpful with possible concussions. Visiting teams will be encouraged to use the systems when they play at any of those three sites.

RamNation Post of the Week. These won’t necessarily be posts we agree with, but rather thought-provoking posts that sparked good responses and discussion…or simply something enjoyable to read. Irish40backer discusses whether CSU should be a finesse offense and abandon the power run game. As honorable mention, we also loved this post by gorams44 who told a story about Nico Carvacho, illustrating why fans’ support of CSU athletics is more than just wins and losses.

Swoll Cracker’s Blog is a Must Read for CSU Hoops Fans.  Speaking of Carvacho, his value to the CSU basketball program goes well beyond his tenacious play on the court. According to Steve Ivy, who writes Cracker’s College Hoops blog and follows the program as closely as anybody, Carvacho has taken it upon himself to take new, young big men Dischon Thomas and James Moors under his wing, providing leadership and personally helping them with positioning on both ends of the floor. You’ll find a ton of great additional insights into the CSU men’s hoops program via Steve’s blog.

Please Support Our Sponsors! Please give your business to our generous sponsors who keep this website going. Ginger and Baker is one of the best dining spots in all of Fort Collins, with a fabulous restaurant, rooftop bar, bakery, and teaching area. Mighty River Brewing Co. is owned/operated by Dan Miller, a diehard Ram fan and long-time RamNationer…and you will taste the passion in each of his craft beers. Rams Book Store has been a sponsor since the very early days of RamNation.com, so if you’re in the market for CSU gear, please make them your first choice! We encourage you to regularly visit each of our sponsors, give them positive reviews on Google and/or Facebook, and thank them for their support of RamNation.