With 3:43 remaining in the fourth quarter and the Rams trailing by 3, Head Coach Ryun Williams challenged his team during a timeout, instructing them “to go out and show what kind of character we have.”

The Rams were going to have to dig deep as the visitors from the tundra of Laramie were effectively executing their methodical patterns on offense and stifling the Rams with their defense.

And they listened to their coach in those final minutes to walk away with a famous victory that moved their conference record to a Mountain West leading 10-2 and send their bitter rivals home sad. 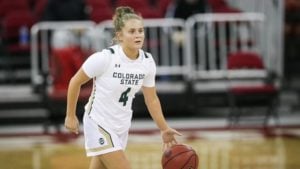 On the offensive end, it was diminutive point guard McKenna Hofschild delivering the blows as she attacked the rim fearlessly and scored from the perimeter as well. She had delivered what Williams has wanted when he instructed her “It was go time.” Yes it was as Hofschild, held in check through the first half, finished with a game high 22 points, including 9-10 from the charity stripe.

On the defensive end, it was a team committed to making things awkward for the Cowgirls. Guarding the ball, helping when needed, finishing possessions with rebounds. So effective that they held Wyoming to only one field goal and forced three turnovers.

Williams learned a lot in those final minutes about his team.

“We learned that we’ve got some toughness. How to execute late game.  We learned we have courageous kids. We have winning character.”

The Rams had closed on a 10-4 run. The run of a championship caliber team.

Said Hofschild when asked about the conference race “It’s exciting. There’s a lot of positivity. A lot of excitement.” 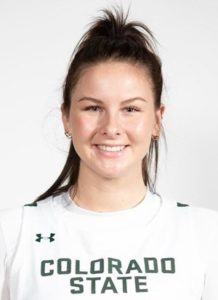 Senior Jamie Bonnarens came off the bench and brought the Rams back quickly in the second quarter after they had fallen behind 19-12.

She scored 10 of her 12 points in the first 6 minutes of the quarter, fueling an 18-5 run by the Rams. The Rams were struggling to find offensive consistency and Bonnarens ‘ experience, leadership, and poise jumped out in solving the puzzle that Wyoming creates defensively.

”I try to bring a spark whenever I come on”, she said. “Wyoming is a different team. I’ve played them before and know what it takes.”

A pair of games with New Mexico who are currently in second place in the MWC standings with a conference record of 6-2. These games were supposed to be played in Albuquerque but COVID19 restrictions prevent the Lady Lobos from playing athletic contests there.

So the games have been moved to Moby Arena. These two games will go a long way to deciding a conference championship in what appears to be a 3 team race between CSU, New Mexico, and Fresno State.