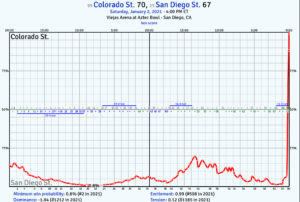 With just under 10 minutes remaining in the first half, Colorado State was almost dead in the water. KenPom.com, the most recognized advanced analytics site in College Basketball, rated the Rams’ win probability at 0.8%.

Let that sink in.

Sounds impossible but think about it. Odds of about 1 in 125. 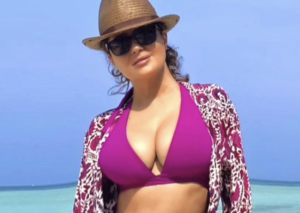 More likely than me dating Salma Hayek (the odds of dating a supermodel are estimated at 1 in 88000).

(Note: I needed an excuse to fit a recent Salma Hayek picture into one of my blog posts. I found one. You’re welcome in advance.)

About as likely as losing a 14-point lead in the last 3 minutes to Boise State. (Sorry, that was unforgettable).

The CSU comeback against San Diego State was epic for sure. As I mentioned in my game post, Pomeroy lists it as the largest deficit overcome in all of college basketball this season And it is the largest against a Top 25 team since 2010 when Pomeroy began accumulated these stats.

I thought I’d show the rankings of the top players in the MWC as rated by a new advanced stats website. The site is run by Evan Miyazoto, who is working on a PhD in statistics. I won’t get into the gory details of how he assembles his stats (you can get that by visiting his site).

But here’s the list of the top players season to date in the MWC. 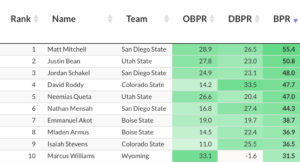