Two words regarding the game.

Have the Mountain West coaches ever got it so wrong in their Player of the Year voting? They actually named SDSU’s Matt Mitchell ahead of Queta.

He finished yesterday’s game with 18 points, 14 rebounds, and 9 blocked shots.

He is a nightmare to prepare for on both ends of the floor and he caused the Rams fits all night.

And now the waiting begins.

The wait was always going to be excruciating if the Rams didn’t win the auto-bid given to the MWC Tournament champion.  Too much history over the last 20 years to think otherwise.

I can remember back to 2003 when CSU had that magical run to the Mountain West Championship, defeating the top 3 seeds on their way to the championship. Wyoming, BYU, and UNLV in the final. 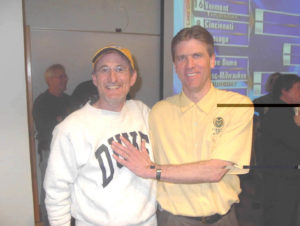 It set up a marvelous selection show that CSU hosted at the McGraw Center that Sunday evening.  And when speculation appeared that CSU would be sent to Salt Lake City to play Duke, I had no choice but to show up to the McGraw Center wearing my Duke sweatshirt.

And when announced, there were loud roars from that group that had assembled.  It would be CSU as a 14-seed playing 3-seed Duke in Salt Lake City.

No nerves, all joy!

CSU had lost in the semi-final in Las Vegas and it made for a nervy Selection Sunday. Yes they had some strength to their resume with home wins over San Diego State, New Mexico, and UNLV, all NCAA teams. But it wasn’t a done deal.  There were a set of first round games scheduled to be played in Albuquerque that season and it looked to be a nice spot for the Rams to land.

Of course there was joy when the Rams were announced in the field as an 11-seed. I do remember feeling a little disappointed when their opponent and site were named.  Murray State and The YUM Center in  Louisville.

Turns out that CU got Albuquerque and UNLV that year and beat the Rebels.

CSU did not host a selection show event that year as COach Tim Miles wanted it to be just for the team. I did manage to sneak into Moby to congratulate players and coaches that year after the announcement came.

We were virtually assured that CSU had earned an At-Large bid in 2013 with a 2nd place MWC regular season finish. A loss in the MWC tourney semi-final was hurtful (UNLV with an injured Dorian Green) but not enough to lose a bid.

And once again there was hope for a nearby site as Salt Lake City was once again hosting first round games. But the committee, in its infinite wisdom, decided to send CSU as an 8-seed to Lexington, KY in the same group with top-seeded Louisville. Wichita State got the 8-seed in Salt Lake (Gonzaga was the 1-seed) and parlayed it into a Final Four appearance.

No nerves that year, and the disappointment was short-lived because it turned out that the trip to Lexington was an awesome experience.

A 13-5 conference record after an undefeated out of conference season. An RPI in the 20’s.  The Rams were a lock.

And I can still remember sitting in my family room watching the TV.

And when they finished the last regional bracket and it did not include CSU, I sat and sat and thought that there had to be a mistake. Somehow CBS and the NCAA had screwed up and forgot to put up the match-up that included CSU.

It was the most painful feeling ever as a fan. More than I’ve ever felt after a tough loss. Because that 2015 team had earned that bid over the course of an entire season.

It was the kind of decision that makes one cynical about the selection process. Sure, teams can remove all doubt by winning conference tournaments or by winning more in the regular season. Winning does cure all.

But that one was so far off base. The committee screwed that one up.

Uneven scheduling caused by COVID has teams that are not automatic qualifiers in precarious positions. NET Rankings, Quad 1 wins, Quad 3 losses. Etc will come into play but with such a limited amount of cross-pollination because of a limited amount of out-of-conference games, its really unclear how much the committee will value any of it.

I believe that the Mountain West has three teams that are deserving this season.  San Diego State, Utah State, and Colorado State.

In the case of CSU, I see them as a 12-seed playing one of the play-in games. A strong resume rendered a bit incomplete because of COVID cancelations in the non-conference is not a reason to exclude them.

But I also don’t expect the right thing to happen, mostly because of the barrier of cynicism that I have because of 2015.

And so I will be cranky, irritable, and anxious over the next day-and-a-half as I await the announcements of Selection Sunday. In the past I was excited because I would attend the games. I won’t be doing that this year regardless of the outcome.

I care this year because these players and coaches deserve it for what they have been though.

They have earned it!