It wasn’t a question of if but when in terms of when we’d see a change like this to Niko Medved’s staff. Medved has assembled what many consider to be one of the top coaching staffs in G-5 land.  A veteran like Dave Thorson with oodles of experience and two up-and-comers in Ali Farokmanesh and Blount. And a great DBO in Aaron Katsuma.

Hopefully you all took to the time to listen to the RamNation podcast earlier in March when we got to spend nearly an hour with Coach Blount. If you did, you would have learned a lot about his background and pedigree that qualifies him as an up-and-comer in the world of D-1 college basketball.  His knowledge and experience along with an infectious personality is a winning combination!

Make no mistake about it. JR Blount will be a D-1 Head Coach someday. The move to Iowa State is the next step on that journey.  The Big 12 is certainly a bigger basketball conference than the MWC and he will garner loads of experience in terms of recruiting at a higher level, skills development, and game preparation.

I’m not getting any younger so of course I don’t handle change as well as some others. I wish we could have kept this staff together for at least another season. That being said, I have more than enough confidence that Niko Medved will identify a strong candidate to replace JR and that the CSU program will continue to grow.

I will miss JR and his family. He and his wife Ashley have been tremendous assets to the Fort Collins community. And I’ll miss watching his two adorable children grow up.

I sent JR a congratulatory message this morning. Here it is along with his response. 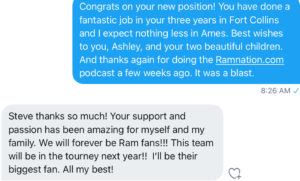